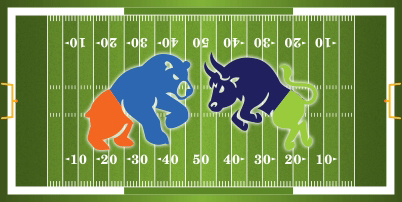 Webster’s Dictionary defines gambling as “playing a game in which you can win or lose money or possessions,” or “risking losing (an amount of money) in a game or bet.”  Taken very broadly, trading might possibly be seen as gambling.  Every time you trade, you are risking money.  But, trading is not a “game” and you are not laying down a “bet”.  You are purchasing (or selling short) something of value (a stock, a futures contract, etc.) with the belief that your position will increase in value.  If trading were gambling, then any investment is gambling.

The missing factor in this discussion so far is chance.  Gambling is generally associated with games of chance: the lottery, playing craps, betting on sporting events.  The law in the U.S. makes this distinction: betting on sporting events is gambling, whereas playing daily fantasy sports for money is not, as the latter is viewed as a game of skill, not chance.  Similarly, trading is not viewed as gambling under the law as it a “game” of skill.  Aside from that, it is a major part of the world economy.

So, why does trading often feel like gambling?  Because, trading feels like gambling when you trade without skill and rely on chance.  How many times have you entered a trade and hoped the price would go in your direction?  Why are you entering trades if you don’t have a solid technical basis for entering that position?  Of course, not every trade is going to go your way.  There are factors and variables (chance) that no one can control.

Like in daily fantasy sports, you don’t know that players on your team are going to hit home runs or score goals or rush for over 100 yards that particular day.  But you can analyze their recent performances and their matchups to determine who would be good have on your team.  They could all be duds or you could hit the jackpot, but at least you gave yourself an optimal statistical chance, assuming you know how to properly analyze player performances, matchups and other factors such as weather.

Daily fantasy baseball, like trading, can seem rather random.  There’s an incredible amount of variance in baseball, making it difficult to predict which players will do well on any particular day.  One day a player might go 4 for 4 with 2 home runs and 5 RBI’s, the next day 0 for 4.  But, the head of one of the leading daily fantasy sports content websites recently told me that 5% of the people playing daily fantasy baseball are winning 90% of the money.  Think about that.  Those people in the 5% really know what they’re doing, in a field that seems quite random.

You can do the same with your trading.  With the right tools and approach, you too can be consistently profitable.  Without them, … you’re just gambling.

Not a member? Sign up for the Weekly Live Training and Q&A with Paul Levine. Click here for more info.

CFTC RULE 4.41 – SIMULATED OR HYPOTHETICAL PERFORMANCE RESULTS HAVE CERTAIN INHERENT LIMITATIONS. UNLIKE THE RESULTS SHOWN IN AN ACTUAL PERFORMANCE RECORD, THESE RESULTS DO NOT REPRESENT ACTUAL TRADING. ALSO, BECAUSE SUCH TRADES HAVE NOT ACTUALLY BEEN EXECUTED, THE RESULTS MAY HAVE UNDER- OR OVER-COMPENSATED FOR THE IMPACT, IF ANY, OF CERTAIN MARKET FACTORS, SUCH AS LACK OF LIQUIDITY. SIMULATED OR HYPOTHETICAL TRADING PROGRAMS IN GENERAL ARE ALSO SUBJECT TO THE FACT THAT THEY ARE DESIGNED WITH THE BENEFIT OF HINDSIGHT. NO REPRESENTATION IS BEING MADE THAT ANY ACCOUNT WILL OR IS LIKELY TO ACHIEVE PROFITS OR LOSSES SIMILAR TO THOSE BEING SHOWN.

U.S. GOVERNMENT REQUIRED DISCLAIMER - COMMODITY FUTURES TRADING COMMISSION FUTURES AND OPTIONS TRADING HAS LARGE POTENTIAL REWARDS, BUT ALSO LARGE POTENTIAL RISK. YOU MUST BE AWARE OF THE RISKS AND BE WILLING TO ACCEPT THEM IN ORDER TO INVEST IN THE FUTURES AND OPTIONS MARKETS. DON'T TRADE WITH MONEY YOU CAN'T AFFORD TO LOSE. THIS WEBSITE IS NEITHER A SOLICITATION NOR AN OFFER TO BUY/SELL FUTURES OR OPTIONS. NO REPRESENTATION IS BEING MADE THAT ANY ACCOUNT WILL OR IS LIKELY TO ACHIEVE PROFITS OR LOSSES SIMILAR TO THOSE DISCUSSED ON THIS WEBSITE. THE PAST PERFORMANCE OF ANY TRADING SYSTEM OR METHODOLOGY IS NOT NECESSARILY INDICATIVE OF FUTURE RESULTS.